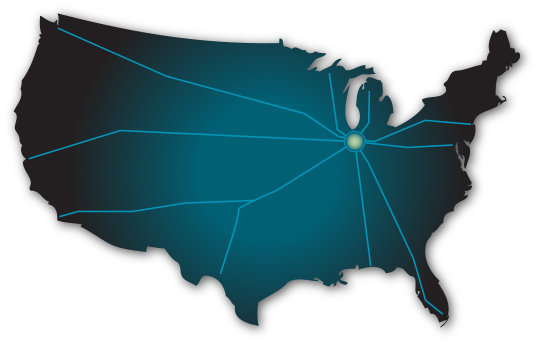 All major surface routes between the east coast and Chicago (the nation’s rail hub) pass through Northwest Indiana. Lake County, Indiana is less than one hour from Chicago, two from Indianapolis and Milwaukee and four to five hours drive to Detroit, Cleveland and St. Louis. Chicago’s O’Hare and Midway Airports are within an hour’s drive. The South Shore and Metra provide a valuable option for rail travel to and from Chicago.

Gary/Chicago is the official “third airport” for the Chicago area, supplementing Chicago’s major airports, O’Hare and Midway. Gary/Chicago Airport has been designed with an eye towards growth, and the administration is courting airlines aggressively. Numerous businesses including Boeing, Menards and White Lodging Services, base their corporate aircraft here. A National Guard installation has also been built.

The Port of Indiana is close by in Portage, Indiana. It connects Indiana to the world via the St. Lawrence Seaway and handles more ocean-going cargo than any other U.S. Great Lakes port and 15 percent of the U.S. steel trade with Europe. It handles half a million trucks, 10,000 rail-cars, 400 barges, and 100 ships per year.